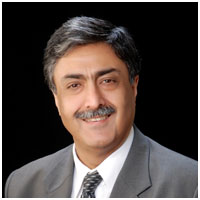 Pravir Vohra, was the President and Group CTO at ICICI Bank. His focus was to ensure a meaningful alignment of Technology with overall business goals and obtain the best from people, processes and information within the organization.

The objective was, clearly, to help ICICI Group remain agile, flexible and competitive. As Group CTO he played a key role in shaping the Bank’s technology investments through repositioning strategies across both execution and product innovation. By leveraging both new and existing technologies, he had consistently focused on increasing efficiency, reducing costs and supporting competitiveness, as well as creating differentiated products which have enabled the enterprise to retain market relevance. Mr. Vohra oversaw IT strategy & innovation, enterprise architecture, process automation, group IT infrastructure and was responsible for leveraging technology synergies across ICICI Bank and its group companies.

Mr. Vohra, a Certified Associate of the Indian Institute of Bankers and a postgraduate in Economics from St. Stephen’s College, University of Delhi . He began his career in the banking industry in State Bank of India where he worked for 23 years. He held various senior level positions with the State Bank of India, both in India and abroad. His assignments included responsibility for the technology function for State Bank’s branches in the US and Canada.

Prior to joining ICICI Bank, he was with Times Bank in the capacity of Vice President in charge of the Corporate Services group. He was responsible for spearheading the bank’s technology enabled services to corporates in areas like cash management, supply chain management and merchant banking.

Mr. Vohra had been associated with the ICICI Group for over 12 years. He earlier served as Retail Technology Head and also Head of the Technology Management Group. In these capacities he oversaw the deployment of technology across ICICI Bank’s domestic & international operations and was instrumental in creating a future ready, platform independent & scalable infrastructure. With a stint spanning three decades in the industry, Mr. Vohra has immense experience and knowledge in IT architecture, domain expertise in financial products, process re-engineering, IT operations and strategy.

Accolades won by Mr. Vohra include The Asian Banker Achievement Award for Technology & Operations in 2006 and the Symantec Asia South Visionary 2008. He has also featured on the Information Week’s Global CIO 50 List for 2009.