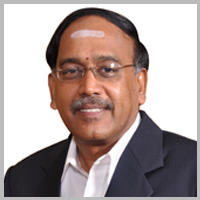 T.G.Dhandapani is the Group CIO at TVS Motor and Sundaram Clayton group.He is a Chartered Accountant having more than 31 years of professional experience in the fields of Finance, Business planning, Operations, Projects and IT.
He has been serving in TVS group for 30 years and handles IT for Sundaram Clayton / TVS Motor group of companies for last 11 years. He is responsible for IT strategy development and execution in 10 companies including TVS Motor and Sundaram Clayton. 8 successful SAP implementations were carried-out under his leadership.

Lean manufacturing, electronic Kanban, digitization of TPM and NPD process, electronic collaboration with suppliers and customers, digitization of new product development process are major achievements in IT implementations.
He has also facilitated in-house developed Dealer Management System – an ERP for TVS Motor Dealers and all 1000+ dealers have adopted the system across India and Indonesia.

He is member of academic council of D.G. Vaishnav College – Chennai.
He has been recipient of CIO Gold Award by CIOL-Dataquest Enterprise Connect awards 2007.
He has been awarded South Asia Visionary 2008 by Symantec Corporation.
He was honored as BEST CIO OF INDIA by Stars of the Industry Group and Asian Confederation of Businesses in 2012
TVS Motor Company was awarded SAP ACE in the year 2007, 2008, 2010, 2011 and in 2012.
Sundaram Clayton received first ever SAP ACE – Award for customer Excellence in the year 2006.
US based Managing Automation has awarded Sundaram-Clayton as Managing Automation Progressive manufacturing 50 for digitizing lean manufacturing in ERP in the year 2008 for Sundaram-Clayton and TVS Motor was awarded PM100 in 2009 & 2011.
He is CIO100 awardee for four consecutive years from 2008-11 and recipient of Super Achiever Award in 2012
He is recipient of Global CIO award by Information Week in 2011.

A new business model has been developed titled enabled oil business which has automated all commercial processes end-to-end using Information Technology. Rs 100 crores business with half a million transaction is handled by a single person.