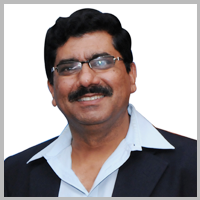 He is responsible for IT Solution Architecture, Automation and Process Improvement in ITeS deliveries and Shared Services Operations across 23000+ employees in 56 delivery locations worldwide.

Having done his Bachelors in Electrical and Electronics in 1991, he started his career in field of Mechanical Engg and handled manufacturing Shop floor, installation and commissioning of 3 plants, trade with UK, Japan, and South Korea and picked up skills of observational trouble shooting and resolution from Japanese counterparts. In 1998, he shifted to Software Engg and then realizing that IT has much to transform and contribute in ITeS Sector, he moved on to ITES Sector in 2000. There he handled transition of 15 processes from US and UK and also handled P/L responsibility for 1200 odd people BPO Operations.

Understanding that Process Automation is the key to improvements and value add that clients expects after outsourcing, in 2006 he started a full-fledged Dept in HGS. Handling BPO/ KPO operations had already given him insights into floor practices. His expertise is a combination of Business Excellence and Software based Automation resulting in massive improvements in operational performances. He is known as Master Implementer having implemented 92 odd process enhancement implementations through software applications in short time across large number of employees.

He also completed his EGMP in top grades from IIM Bangalore and did course in Mgmt of Intellectual Capital from IIM Ahmedabad.

Ajay has been a vivid traveler and speaker at many a functions. He had also addressed 200 odd CIO’s from APAC at Singapore. He is founder President of CIO KLUB Bangalore Chapter, Won CEO’s Award 2012. 2009, 2007, is Jury member for IT Next 100, Won Innovation Award at World HRD Congress 2010, winner of Edge Award 2009 for Implementing Enterprise wide Applications, and Won First Prize for Business process Improvement at Technology Senate 2007.